How To Organise A Stag Do In Nottingham On A Budget

Organising a stag do in Nottingham is no easy task. Putting together a guest list, finding a date everyone can agree on, fielding endless gripes of “I want to do x” and “I think we should do y” and, of course, dealing with the overwhelming pressure that this has to be one of the great nights of the groom’s life.

We can’t help with all of those issues, some of them straying into the expertise of therapy, but what we can do is help you solve the most common complaint of all when it comes to stag do planning.

The last thing anyone wants, especially when it comes to a big group of lads of varying degrees of familiarity, is one or more throwing their hands up and saying they’re skint. That’s why one of your most important jobs as the stag do planner is to make sure the cost is something everyone can afford.

To help overcome this tricky part of organising a stag do, we’ve put together this list of our top Nottingham budget stag do ideas.

Budget Stag Do Activities In Nottingham

Entertainment and activities are always going to be a core part of a Nottingham stag do. Organising a good time for your groom and the other guests is the primary job of a stag do planner, and that doesn’t change even if you’re putting together your Nottingham stag do on a budget.

The Nottingham Stag Do Assault Course is a great way to do something active on a budget, and no doubt will provide good banter material for the rest of the afternoon to come. With tunnels, nets, rope swings, beams and tightropes to navigate, it’s sure to be a great source of fun for any stag party.

Everyone’s seen these sort of game shows on TV and thought to themselves: “I could do that easily”. Well, now's your chance to put your money where your mouth is. It’s A Knockout in Nottingham is a great choice for any budget Nottingham stag do, offering great laughs for three hours, and a bottle of fizz for the winner!

Horse Racing in Nottingham can be a great budget idea for a Nottingham stag do, provided you don’t get too into the betting scene. You’ll get race day tickets for the premier enclosure, giving you access to  a private lawn for the full 6 hours.

Paintball in Nottingham may be a little more expensive than some of these other options, but in terms of value for money it’s pretty exceptional. With a half day or a full day package, you’ll receive equipment, clothing, and 400 balls to go wild with in 150 acres of the famous Sherwood Forest. Do we need to say more? An activity where you shoot people is going to be a winner on even a budget Nottingham stag do.

If you’re interested in getting the most out of every pound spent, then our packages are well worth considering for your budget Nottingham stag do. Each of these provides access to a range of activities to keep your guests entertained for the weekend. Our themed packages for this location include:

Sure, there’s likely to be an endless amount of haggling over what activities are the most fun, but if there's a third certainty to put alongside death and taxes, it’s that a Nottingham stag do requires a decent bar/pub/watering hole/beer garden or anything in between. 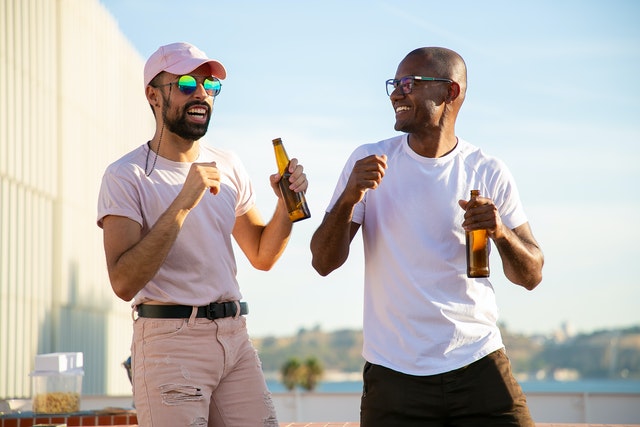 After all, how good could a stag party have been if you remember most of it? To help you find a suitable establishment, here’s our list of cheap bars in Nottingham for your budget stag do, so you can keep the drinks flowing without bleeding your wallet dry.

Popular with students (which is always a good sign for those looking for a drink on a budget), the Cucamara Bar is a haven for those in need of cocktails and shots at a reasonable price. Situated in Nottingham city centre, the Cucamara has a busy dance floor nearly every day of the week, and some incredible deals on drinks that could have even the staunchest liver throwing in the towel before you’ve even thought about hitting the ATM. Some of their most popular deals include:

Here, the difficulty won’t be managing your Nottingham stag do budget, it’ll be convincing everyone else to move to the next location…

No, it’s not a euphemism for dashing off to the bog. Nestled right next to Nottingham Castle, a budget Nottingham stag do traveller may stumble across the Ye Olde Trip To Jerusalem. An impressive listed public house built into the caves beneath the castle, and with claims to be the oldest inn in England. This pub currently falls under the Green King umbrella, which means cheap pints, cheap wine, cheap spirits and pretty much everything else alcoholic on the menu. This makes it a great option for those who want to start the evening off at a more relaxed venue before succumbing to the inevitable tidal wave of shots, slammers and inevitable ye old trips to Jerusalem after having one too many.

Located right by the old market square is The Walrus. A self proclaimed ‘dive bar’, this charming, American-style establishment, has some of the cheapest cocktails to be found on weekends in Nottingham. I hear you scoff. Cheap? Cocktails? Usually you’d be right to claim those two things never belong in the same sentence, but I have two more words that should dispel all doubt. Happy hour. Before 9pm on a Friday & Saturday night, all cocktails are two for £10, which works out as £5 each for those who struggle with long division. That’s scarcely more than what you’d pay for a pint at most local pubs these days. Coupled with a dedicated beer pong area, The Walrus is likely to be a win on any budget stag do in Nottingham.

Worried about the morning after? Take a look at our sister article on nursing a Nottingham stag do hangover.

Anyone looking to take their ‘stagging’ seriously is going to need somewhere to sleep it off after the night is over. However, as anyone who’s tried to go on holiday lately can attest, hotel prices are astronomical. 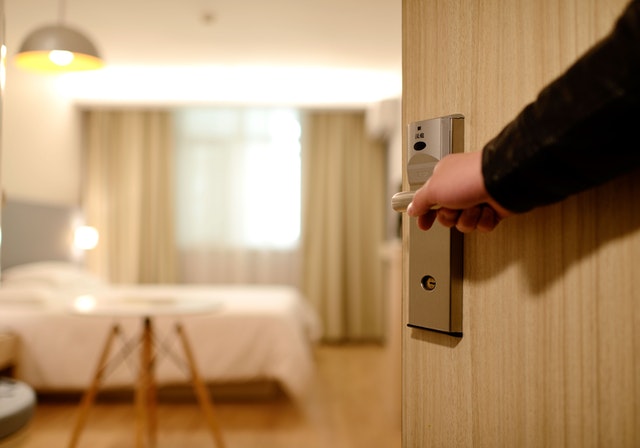 So, take a look at this selection of budget accommodation for your stag do in Nottingham we’ve put together to try and make this weekend essential a bit easier to swallow.

If cheap and cheerful had a dictionary entry, there’s little doubt this would appear amongst the examples. Travelodge is always a safe bet when you’re looking for accommodation on a budget, and the Nottingham Central Travelodge seems particularly so. A double room goes for as little as £72.99, so if you don’t mind sharing that works out as £36.50 per person. Not bad at all. Coupled with the fact that its central location means there’ll be no need for overpriced taxis back from the nightclub, this is likely to be as reasonably priced as reasonable accommodation gets in Nottingham.

The Horse And Jockey

For those who prefer a private room, The Horse And Jockey offers great rates on single rooms: around £35 for a weekend night. That makes it a decent option for if any of your stag guests are overly optimistic about their chances of bringing someone back from the bar crawl. The catch, as there always is, is that it’s a fair bit further from the city centre than the other options: about 6 miles away, situated in Stapleford. Bussing or training is still perfectly viable, though an Uber or a Taxi will likely be your best bet of getting home again. However, even with this cost factored in, if you’re looking for a private room, it’s still likely cheaper by half than what you’ll find in the centre.

If you aren’t fussed about sharing the room, potentially even with strangers, then there are a slew of hostels that can be found in Nottingham city centre. The cheapest we could find at the time of writing was the Igloo Hybrid at £27 a night for a stay in a 6-bed dorm. However, if you book early with a big enough group, you might be able to block off the entire dorm for yourselves, which could be a great way to keep the party going (quietly) even after the night is done.

*Prices may vary depending on party size and date of booking

Cheap Places To Eat In Nottingham

Despite the many, many Brits who have attempted to prove otherwise, man cannot live on beer alone. At some point in the evening you’re going to need some grub, preferably sooner rather than later if you want to keep everyone fuelled up for the long evening ahead. That’s to say nothing of the arguments that can break out once your guests start coming down with a bad case of the hangries. 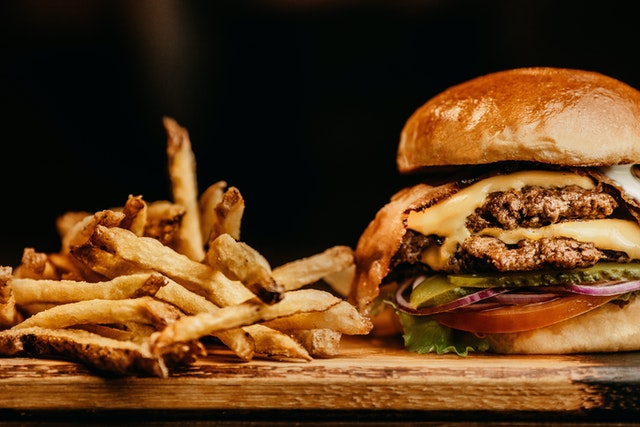 You’d be hard pressed to find decent food at lower prices than this in Nottingham’s city centre. Edin’s Kitchen offers a quaint selection of tasty homemade food at some impressive prices. If you’re stopping by for lunch, the two course set menu will only set you back £5, and for dinner it’s £8.95. Not too shabby at all. They switch up their menu regularly according to seasonal availability, so it’s well worth checking online to see what’s in if you’re planning on making a stop here. However, for good eats on a budget stag do in Nottingham, it’s definitely a top contender.

Just outside of the Lace Market you’ll find restaurant Yamas, a cosy, authentic Greek restaurant. They serve traditional Greek cuisine, meaning hearty plates of fish and a mouth-watering range of meat dishes. Perfect fuel for a stag night out on the town. What’s unusual about Yamas is that the prices are very reasonable. A meat dish comes in at as little as £5.95, and fish at £5.85. Granted these lowest cost dishes may not be enough to satisfy, but the cost average for both categories hovers at roughly £8. Far from impossible to stomach. They also have a tasty range of vegetarian options as well, meaning that all dietary preferences are likely to be satisfied.

If you’re looking for more of a balanced approach between cost, food quantity and flavour, then Oscar & Rosie’s might be the place for you. A specialty pizza restaurant slap bang in Lace Market Square, often hailed as the best pizza in Nottingham, offers a deliciously wide range of quality pizzas. Most of them will set you back around £16.50, but you’ll get a lot of food for that price, enough to keep you going without needing to dash off for a late-night kebab at 2am. Now if you’re feeling brave, they also offer an infamous metre of pizza which is, quite honestly, an insane amount of food. However, if you’ve got a decently-sized group (minimum of 10), you can opt for bottomless pizza & sides instead at £18.50 a head. Not a bad way to celebrate, provided the groom doesn’t plan on fitting into 32” waist suit trousers.

At Essential Adventure, we’re all about fun and entertainment. We want your stag and your guests to have the best time possible on a stag do in Nottingham, whether you’re on a tight budget or not. So, if you have any questions, or you’d like to book some of our activities or packages, please contact us on 01752 418038 or by email at [email protected]. One of our team members will be delighted to help.