Choosing the best stag do activities is tricky, just because of the pure number of choices, but if you're looking to add in at least one awesome stag weekend shooting games then carry on reading. We have put together a list of 10 amazingly good fun stag weekend  shooting games for you to consider. Some of them you will expect and have possibly done before, but there may be some in here that you weren't aware of and throw in something a little bit different.

Stag do shooting activities are extremely popular and most can be found throughout the UK, so whatever you're looking to choose, the chances are it won't be far away. Once you have some ideas, we'll happily help to set everything up for you and if you , below, but please feel free to give us a quick call, we can explain how everything works.

Now we've taken aim, it's time to fire through to 10 of the best stag weekend shooting games available!

We're going to break the stag weekend shooting games in to two sections and the first one is all about standard shooting, using hand-held weaponry. This features one of the overall favourites for all stag weekends, as well as some you may not have thought about:

Clay pigeon shooting used to be something for the upper classes, to get out into the countryside and prove their wealth. Now it's anyone's game. With sites throughout the whole of the UK, wherever you go there will be a centre offering you the opportunity to take down some cocky little clay discs. Sites lending you guns and asking you to smash things to pieces with them usually offer varying amounts of clays to shoot at, 25 per person being the most common amount. All sites also provide highly experienced, professional, shooting instructors. From experience, these guys are the heroes you all need, giving you outstanding tips on how to smash every remaining clay pigeon into a thousand tiny little terracotta pieces.

If you don't like the idea of live shotguns being used (because of that one guy who is likely to go all GTA on you), there's always laser target clay shooting. This just means that you don't actually fire anything, but the lasers register hits and misses and usually give you the added bonus of a digital score board for everyone.

Bows and arrows, step aside and let the next generation through. Crossbows are the equivalent of the longbow's naughty cousin, unleashing their immense power at the pull of a trigger, rather than manually letting rip like a pauper. Even the projectiles are called bolts, making crossbow shooting pretty cool.

Again, there are so many places around the UK where you can go and participate in some crossbow shooting as part of a stag weekend that no matter where your stag do destination, you should be able to find this awesome stag weekend activity fairly close by.

IF you fancy getting lost down a YouTube 'black hole' watching endless videos about philosophical things like 'how many watermelons it takes to stop a cross bow', have a look at no end of completely time-consuming content here. 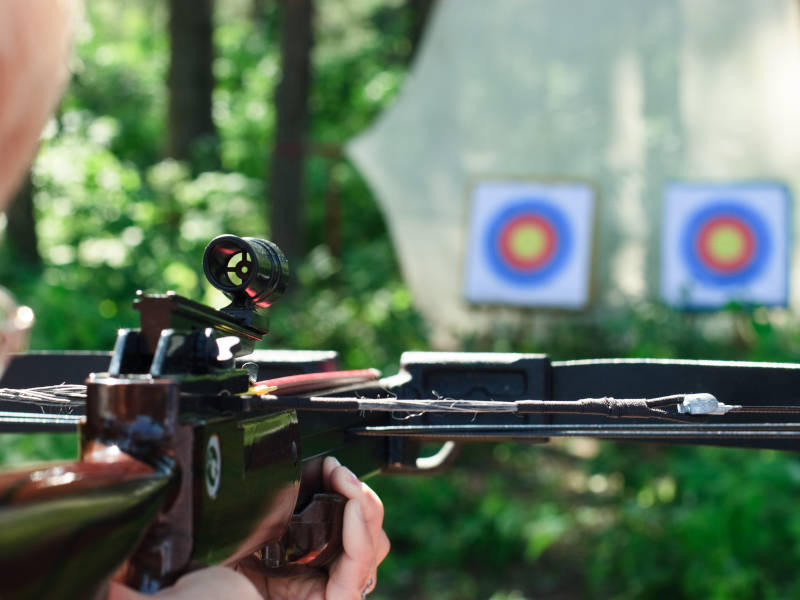 - Bolts away! Crossbows are all about power and accuracy -

As one of the many weapons featured Guy Ritchie's films, the humble air rifle has pedigree amongst the world of (albeit fictional) criminality, so surely this makes it badass. OK, so air rifles aren't all that powerful and won't leave you with aching shoulders from the recoil, BUT, they are loads of fun. The satisfying tap/ting of hitting a target with an air rifle pellet is almost addictive. We're not sure if it's the simplicity of these guns that make them so great, but that's what they are.

It's not as common to find centres which off air rifle shooting (the 'big guns' are often more appealing), but if you're looking for a fairly chilled-out stag weekend, you're probably already looking in the right kind of places anyway.

Most people will know what this is. If not, we wonder if you've been living under a rock for the past few decades. Just in case you have, this stag weekend shooting game gives you the opportunity to run around like a lunatic and actually shoot people, yes real, living people. Although only with paint, it's a great way to prove how much of a legend you are. It's a staple activity for many stag do weekends and a good all-rounder.

You can generally find a paintball centre within about a fifteen to thirty minute drive from the centre of any major town or city and there are so many options to choose from in terms of price, extras etc that it really is a stag weekend shooting game to suit all groups. Even if you've done it before, we don't think it ever gets boring.

Archery is the oldest stag weekend shooting activity around, in terms of when the sport was first used. You won't find it quite the same experience as storming or protecting a castle or conquering new lands, but getting the hang of this skilled shooting sport is a great thing to try.

As well as standard archery with varying difficulties of targets and competitions, somewhere in between archery and paintball is battlezone archery. This is usually run at sports centres or 5-a-side venues and involves inflatable barriers and arrows with rubber ends. It's always quite close quarters and it runs in much the same way as paintball games, with various scenarios. It's a great alternative to paintball and the more 'standard' archery.

Fancy getting your hands on some real weapons? They don't come much more serious than assault rifles. There are several places scattered across the UK which let you have a unique opportunity to let off some steam with a properly cool gun. Although you may not look like Rambo (if you do, we're sorry we doubted you and we take it all back... sir) you will feel just that bit more like him.

You won't be firing 50 calibre rounds into helicopters, sure, but assault rifle shooting is a great stag weekend shooting activity and one that you'll remember for a while to come. The competitions and games you'll take part in will almost certainly leave you wanting to do it all over again.

Similar to paintball, airsoft is a kind of 'simulation' type deal and a great stag weekend shooting activity. It's not as readily available as paintball centres but in general, it's designed to feel a little closer to actual combat. Using plastic pellets instead of balls of paint, these things transfer most of their energy at the point they make contact... in Lehman's terms, it's probably going to hurt more. When a paintball doesn't burst, that's when it really hurts... it's the same idea here.

If you have your own gear (even if you have no idea) then airsoft is definitely going to be for you. If you don't, it may be worth looking at paintball.

Shooting With Your Feet On The Stag Weekend

The last 3 stag weekend shooting games are outside the box. Not shooting with guns, or bows, but with your feet. The 3 best stag do football games will have you shooting with various levels of physicality and possible pain.

The first we'll tackle (excuse the pun) is bubble or zorb football. Whilst there is shooting to be done, it may be slightly more difficult to shoot well. Wrapped up all nicely in a big bubble suit, it can obscure your vision and your skill levels ever so slightly. It's not all about playing a footy match though, you'll also get the chance to be the last man standing and take part in some other more outrageous stag weekend games.

Bubble football is a very popular stag weekend activity and it's not difficult to understand why. You can book it in most town and city centres which also adds to why it's such a truly great stag do activity option. 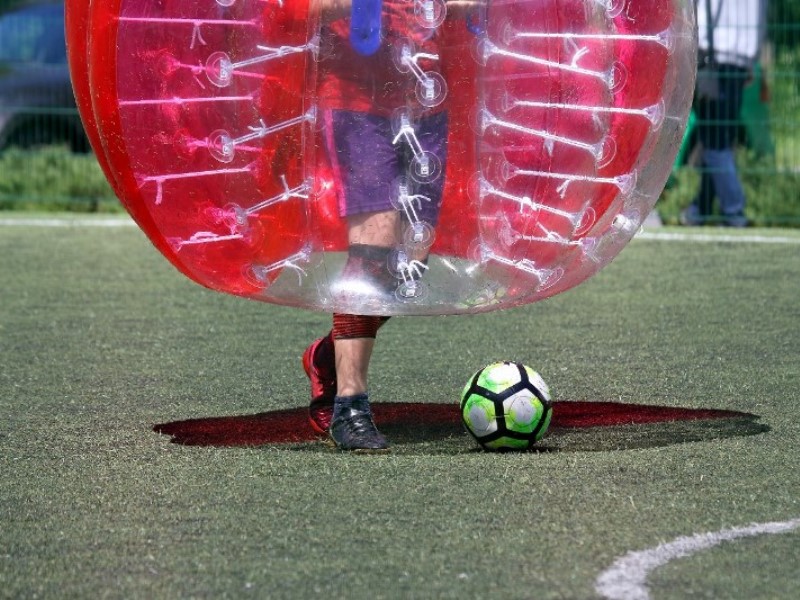 - There's more than one way to score on stag weekends -

The penultimate stag weekend shooting game brings on more shooting pains than shooting practice. Picture this, you're all having a lovely kick-about and attached to your ankle is an electrical collar. Shockingly, someone will have control of all of the collars and be able to dictate when to dish out a healthy shot of lightning. It certainly helps to keep everyone on a level playing field. Even if you're usually a prolific goal scorer, a bolt of electricity just as you're about to unleash a screamer will possibly make it just that little bit tougher.

The last and most chilled out of our stag weekend shooting games is a combination of two great sports. We're not sure who thought up the idea of Footgolf, but whoever it was certainly started something special. Strutting around a course specifically set up for you to showcase your golfing and football knowledge/prowess is something more and more stag do groups are choosing to do.

It's something a little different and is a great addition to any stag weekend. It's also frequently available at golf clubs meaning an awesome club house/associated bar won't be far away either.

Choosing The Best Stag Do Activities

On a slight side note; if you're planning on having a summer stag do, it may also be worth taking a look at our summer stag do ideas. If you haven't quite decided where you're going for the stag weekend, we've also put together a list of our top 10 stag do destinations and if you don't just want to do shooting, take a look at the best stag do driving ideas (which work well with shooting, just not at the same time) or take a look at our website for an idea of all stag do activities which we offer.

A Summary Of The Best Stag Shooting Games

Shooting stuff and people is mega popular on stag weekends. There are loads of great options out there to choose from, but here is our list of top ten stag weekend shooting activities: