There are a good number of great Midlands stag do destinations, all of which provide plenty to do and see. From easy-going to extreme activities, almost endless night-out options and accommodation to suit paupers and kings alike, there is a Midlands stag do location to suit anyone and everyone, no matter what you're looking for. From major cities to large towns, we're about to tell you everything important that you need to know when organising a Midlands stag do.

At any point, please feel free to give us a call and ask us as many questions as your phone contract allows (actually, most are unlimited on minutes so maybe not that many). No matter what the question about your Midlands stag do ideas, just let us know and we'll be happy to answer them for you.

We'll stop banging on now and get to why you're here! Keep reading on to see the best Midlands stag do destinations and work out which is the best for your plans.

Birmingham as a stag do destination is up there as one of the best in the UK, let alone the Midlands. Being one of the largest cities in the UK, this means that pretty much everything you could want to do on a stag do is available. As well as this, there are almost unlimited places to stay, from private accommodation to 4 and 5 star hotels (for those looking for a luxurious stag weekend).

Buggies - right in the city centre and run by the company that make the buggies, an awesome load of fun.

Extreme Dodgems - for true racers. You'll be racing with old saloon cars which have been dressed in steel bumpers and roll cages for some extreme driving fun.

Casino Entry - you may leave the weekend better off than when you arrived (maybe).

Indoor Karting - test your race-craft against the group.

Zorb Football - run into other people/play some football (not so much).

Comedy Club - watch some of the UK's best comedians.

Clay Pigeon Shooting - over-under shotguns will provide you with a feeling of power whilst you try to destroy some clay birds. 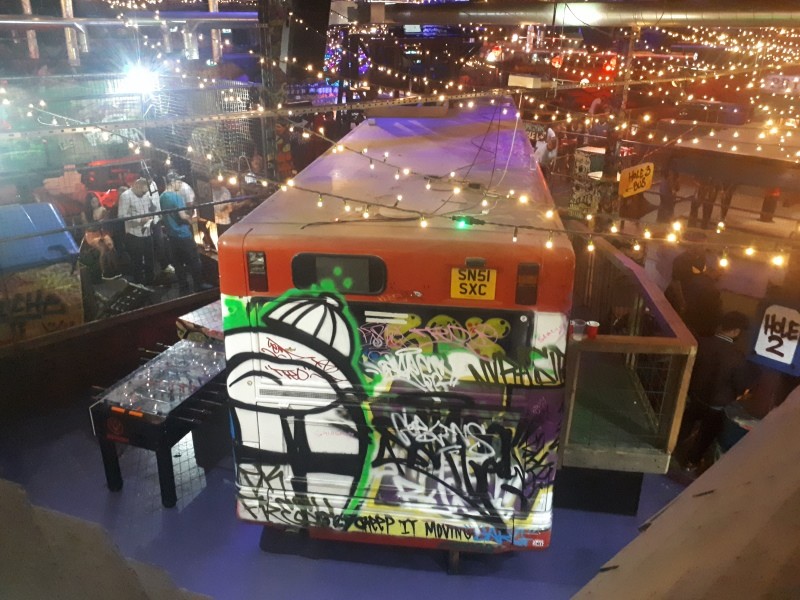 Without a night out, have you even been on a stag weekend? We're not saying that you have to forget where you are, or have been, but at least experiencing the night life is an essential part of being on a stag do and Birmingham has everything on offer along Broad Street and you'll find the following offerings:

Transport - You don't need to worry about getting anywhere in Birmingham. Being such a large city, the transport links are awesome. Public buses go everywhere, there are various train stations and taxis aplenty. Getting to the city isn't a problem either with coach/train stations and an airport just outside of the city. Probably worth pre-booking travel like taxis if you're a big group though, so as not to be split up for ages and waiting for half the weekend.

Nottingham has so much to offer as a Midlands stag do destination and should definitely be considered for any stag do. Take a look at our article on Nottingham stag do ideas (and how to do it on a budget too) for some more inspiration. It's got everything you'll need for a great stag weekend in the Midlands and here are the best offerings:

Buggies - just outside the centre and well worth the trip.

Casino Entry - try to win back all your beer money.

Indoor Karting - race against the group and don't worry about the weather.

Outdoor Karting - for the all-weather racers.

Quad biking - Get on a quad and display your abilities.

Paintball - try to dish out more paint than you 'receive' and ultimately help to add as many bruises to the stag as possible.

Zorb Football - play a variety of games whilst dressed in a wonderful bubble suit.

Comedy Club - go and laugh your arse off with some of the UK's most popular comedians.

Clay Pigeon Shooting - try to shoot as many small clay discs as you can (the person who shoots the least should probably be subjected to a good ribbing).

It's A Knockout - dress in huge inflatables, look and feel silly... along with everyone else.

Nottingham's night life is perfect for a stag do. Have a look at all of the best stag do watering-holes as it will probably leave you feeling like you have to go there.

Drink cost - To give you an idea of drink prices, you can buy a pint of San Miguel at The Gooseberry Bush in the town centre for a lovely £3.05.

Nottingham has great transport links to get to it from anywhere. The train station in the middle provides a great option for those looking to have a few drinks and the East Midlands Airport is still only a short trip away for those looking to arrive in style. Whilst there, you'll also have no problem finding a way to get around. 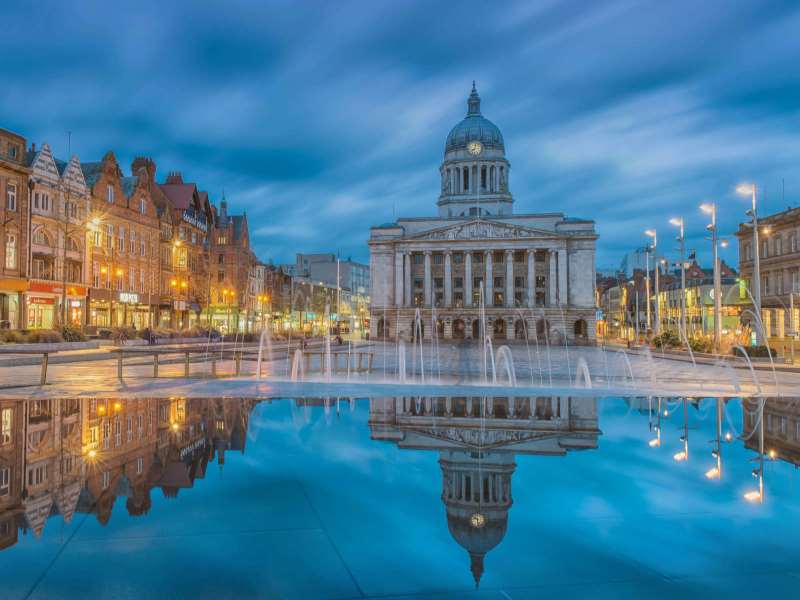 - Nottingham offers anything you could want to do on stag do -

Cheltenham is (just about) in the Midlands, but those who disagree is welcome to write us a letter. It's a great Midlands stag do destination for those looking for a more relaxed stag do weekend. It's not the huge stag destination like your Birminghams or Nottinghams, but still has plenty to offer, especially for those who are into horses (not in that way sicko).

Paintball - the classic stag do 'shoot-him-up' with paint, so he's still alive for the wedding.

Zorb Football - great for those who like running in to other people without any consequences (apart from flailing limbs).

Dodgeball - master the 5 Ds of Dodgeball on your Cheltenham stag do.

Life Drawing - draw a naked lady and try not to just make a stick, man.

Racing - Cheltenham race course is one of the most famous in the country, possibly the world. Check out the fixtures here.

Cheltenham provides lots of options for a night out in the centre of town. Loads of bars provide you with a good basis for a night out and then you can head to the MooMoo club rooms or the 21 club to carry on the party into the early morning. You can also have some Bar crawl babes take you to the best bars and help to keep your night running smoothly.

Drink cost - A pint of San Miguel at The Moon Under Water will only set you back a very reasonable £3.55.

Being a smaller Midlands stag do destination means slightly more planning will be required to get to Cheltenham, but it also means that you won't have to travel as much whilst you're there, so swings and roundabouts. A central train station always helps with ease of getting to and from without driving, so is something to consider making the most of.

Northampton provides plenty of great stag weekend activity options, making it a great Midlands stag do destination. Driving, shooting and sports keep everything interesting for stag do activities and then you can head in to town for a great night out. All of this together means that you're sure to have a great stag do in Northampton.

Indoor Karting - take to the track to earn the top spot on track.

Paintball - take on this classic stag do activity on your Northampton stag do.

Zorb Football - smash everyone up without fighting. Dress in a big bubble and try to play football at the same time.

Quad biking - ever been on a quad bike safari? If not, definitely one to try for your stag weekend in Northampton!

Tank Paintball - not every stag do can say they've driven an actual tank and fired at others. Even if just paint, that's damn cool!

Head in to the centre of town and you will find plenty of places to try during your night out. From chain pubs to local independent bars, there is something for everyone and you'll be able to top the night off by heading to one of the many Northampton clubs. See the links below to explore more of what's on offer for a Northampton stag do night out.

Drink cost - To buy a pint of San Miguel at The Cordwainer will only set you back by £3.45, so you could have a few without feeling too much of a pinch.

We'd class Northampton as the 'mid-sized' Midlands stag do destination, so getting there and back won't be too much of an issue. Catching a train is always a pretty good option to get there, or you could car share to keep money down, if some of you are travelling from a similar direction. Once you're there, there are plenty of options to get around. If you're looking for driving activities, it may be worth planning to take your own vehicles to keep taxi fares right down.

- Northampton has plenty on offer for a Midlands stag do -

Book A Midlands Stag Do Destination

So now you've read about all the stag do destinations in the Midlands and chosen the perfect one (or two) for the stag do, you'll want to get the ball rolling sooner rather than later. The sooner you get everything booked, the better the price for everyone and you're likely to get everything booked for the times you'd like. We will make everything even easier for you. Take a look below at how Essential Adventure help to take the ag-gravation out of stag do planning and then get in touch:

1 - We have an expert knowledge of the best stag do activities, with years of planning stag dos

4 - We'll then provide everyone with their own payment accounts, meaning a lot less chasing people you don't know very well

So we're here to help. If you're keen to get something booked, but are still after a bit more information, just get in touch and we'll help to clear your mind and get everything easily sorted.