A hen do is a fantastic celebration already, but add in one of these awesome hen party themes and you've got something even more spectacular. We've provided 25 great hen do theme ideas for you below, so have a look below.

You can also get in touch with us at any point if you're just starting to get some ideas together for a great hen party. We'll happily run through your ideas and help to plan a great hen party weekend. You can also have a look at our other articles about hen parties, for some further inspiration: Hen Party Ideas / Nottingham Hen Do Activities / Simple Hen Do Ideas / The Best Hen Do Destinations / The Top Ten Hen Party Drinking Games.

If you just came for some inspiration for a hen party theme, here you are:

Ahoy there! The hen can be the captain of your group and command you to do her bidding. Great if the hen has any nautical connections, or if you just fancy being a bunch of highly demanding ladies, pillaging drinks from bars and the like. For something extra you could make a treasure map for all the bars you'll visit.

If you want to get a little bit sexy then why not dress up as ladies of Burlesque? Whether you want to embrace the film and embrace your inner Tess/Ali (Cher/Christina Aguilera) or just fancy putting your own personality into it, Burlesque is certainly going to get some heads turning.

Dress up as the hen. It could be an over-sized item of jewellery that she won't be seen without, or her work uniform that you all choose to wear, to make it all about her. There are so many personal aspects that you could pick out, so pick something that she'll love you all showing off and just try to stop her from laughing!

A very popular option is to go all macho and dress up as the stag. Alternatively, we've run a hen weekend where everyone was dressed up as birds due to the stag's surname is bird-related. Masks of the stag's face are also very popular choices as it requires less 'work' and still has a great effect.

If you remember the 90s and it was a great time in your life, the Spice Girls will take you back to that fun and amazing time. This hen party theme offers enough girl power to make sure you'll have a fantastic time. Hopefully DJs will have some of their songs during a night out too, so you can do the dance routines you know off by heart.

Even though there were only 3 angels, you can still roll with this hen party theme. You could maybe change this to [stag's name] Angel's and then you've got free reign to take on whichever hen party destination you've chosen. It's all about girl power and kicking some behind (hopefully just with some killer dance moves).

There's absolutely nothing wrong with sticking to hen party traditions. Wearing sashes and tiaras (maybe keep the tiara for the hen only) is a great way to show your class and demonstrate the reason why you all look so fantastic. A simple and completely effective hen party theme and one that we think will be around forever.

This is only one to choose if you're planning on going to more refined evening establishments or perhaps for a day at the races. You could also book a VIP Booth to make sure that you spend a night out in complete style. Hire a limo to get everywhere... the world is your classy oyster! 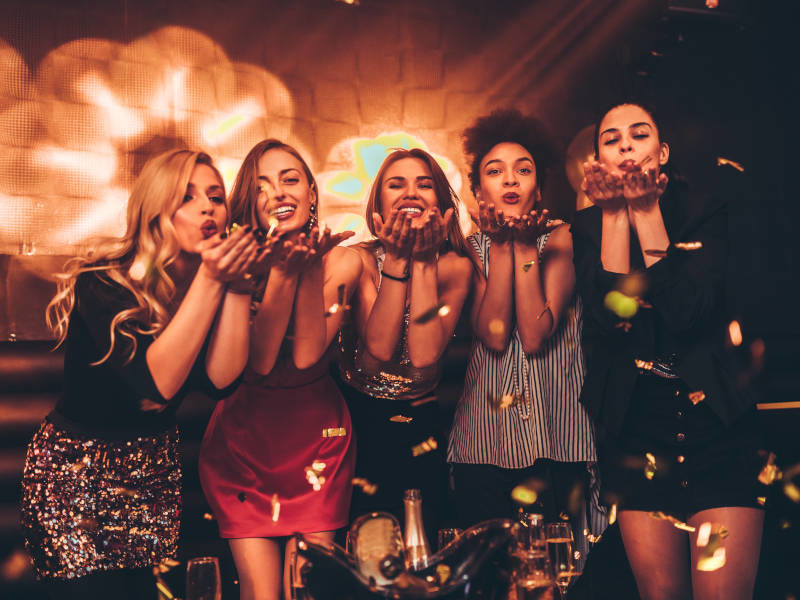 - Get glamorous and stay classy on the hen party -

Eddie and Patsy provide you with some scope to do things in a less than orthodox fashion, dress outrageously, smoke and drink to the nth degree and claim that you're just working hard to stay in character. We think a group of Patsys and Eddies would look pretty sensational too. You could also choose less extravagant characters too, if anyone isn't feeling the 'completely-over-the-top' look.

Well well well... here we are. Princesses, villains, dwarves, witches, dragons, ogres and on and on and on the list goes. Ultimately, if you choose Disney as your hen party theme then you'll probably already know what you're planning on targeting straight away. There are thousands (we're being conservative) of options to choose from.

A big fan of Wonderwoman or Iron Man, then get your Superhero on. With Marvel and DC providing plenty of choice, you could easily choose different heroes for everyone in the group. You could put a twist on the traditional hen party theme and go as the hen's mum and/or dad if they are complete and utter legends.

Considered a timeless classic, you could choose hundreds of different characters from the 20 years and 10 series of F.R.I.E.N.D.S for this awesome hen party theme. The bridal party should (in our opinion) be allowed choice of the main characters and most people know which character they most closely resemble.

A very generic hen party theme indeed, so it gives you plenty of scope to create a theme suited perfectly to the hen. You could choose the hen's favourite film and keep the theme a secret to give her an amazing surprise, or base the hen party theme on a film which has a character resembling the hen (in appearance or personality). The choice is yours, but there are so, SO many options.

Everyone dresses in the classic red and white stripes (hat, scarf and glasses included for extra kudos). A great hen party theme for a night out as you can actually play the game whilst you're all packed in to a busy club. You could also choose to have some select people dressed as Wilma, Wenda, Odlaw, Woof or Wizard Whitebeard (we promise we haven't made these up).

If the hen is a sporty kinda person, you could all choose to go as her cheerleaders or dress up as your favourite sports people. From runners to footballers, hockey players to cyclists and all the other sports you can think of, there's probably someone you could choose to dress like (just beware going out in full lycra though).

Every generation has it's own unique dress style. From the vibrant colours and patterns of the 70s, to the geometric, neon patterns of the 90s, there are certainly some bright outfits to be selected. This could be a load of fun, even if you weren't alive in the decade you've chosen. The hen may like music from a certain time also, so this could determine the hen party theme. On this note, why not think about adding a dance class to the weekend? 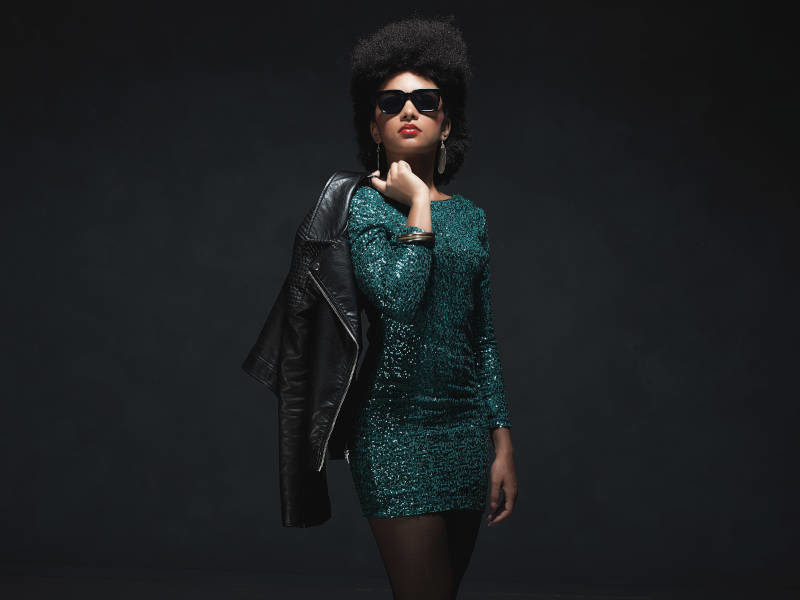 We've heard that Grease is the word. If the hen has always dreamed of being Sandy then why not indulge her dreams? There are also plenty of other musicals to choose from, like the amazing 'Hairspray' (slightly different role for John Travolta in that one), the majestic 'Dirty Dancing' or British staples like 'Mary Poppins'. Get into character and sing your heart out. You could again think about adding in a dance class to truly get into the spirit.

A great hen party theme to choose, especially if the hen is a big fan of the books and/or films. There are so many options for this theme. We think that some 'teachers' from Hogwarts should be present to keep too much potion from being consumed. You could also go as a 'generic' witch or go a bit 'obscure' and show your super-fandom by going as a character like Dobbie (may his soul rest in peace).

Sumo suits are the first things that come into our heads whilst writing this and these would be awesome. Whilst maybe not the most practical of hen party themes, it should be hilarious on a night out as long as you don't get a puncture from your mad dancing. Others to think about are jockeys, horses/camels, big birds etc etc.

Quite a popular stag do theme, but why not show them all how it's done in a morph suit? Half the fun of this is not being able to identify each other, unless you're all in different colours and you have a great memory. Not one for the shy groups as you'll definitely get some attention.

If the hen works as part of an emergency service force, armed force or generally in a uniform then this could be a great hen party theme to choose. They are also very easy to find costumes for and won't mean that you're spending lots of money looking the part.

Get all 'old-school western' and dress as cowboys and Indians. You could have the stag's side of the family/friends dress as the Indians or just allow everyone to choose whichever side they want to be on. The only think to think about is props as pubs/clubs probably won't let you take toy guns/bows and arrows in, even if they are clearly toys (boo hiss boo), even if you are the chieftain's daughter. Axe throwing would be a great activity to also go with your theme.

If we have to explain too much about this theme then maybe you should keep looking for another hen party theme. That's right, you all have to dress in one colour. Whether that's everything in the same colour, or just one item of clothing is up to you to decide, but it's a pretty simple concept.

Have the power to take over countries with your own army of hens. Get the cammo on, paint on your war-paint and get ready to do battle... on the dance floor. You don't have to stick to greens and browns though, maybe you could switch it up by looking for pink cammo or navy uniforms which tend to offer slightly brighter colours. Maybe even head out for some paintball or assault rifle shooting to make it more combatant. 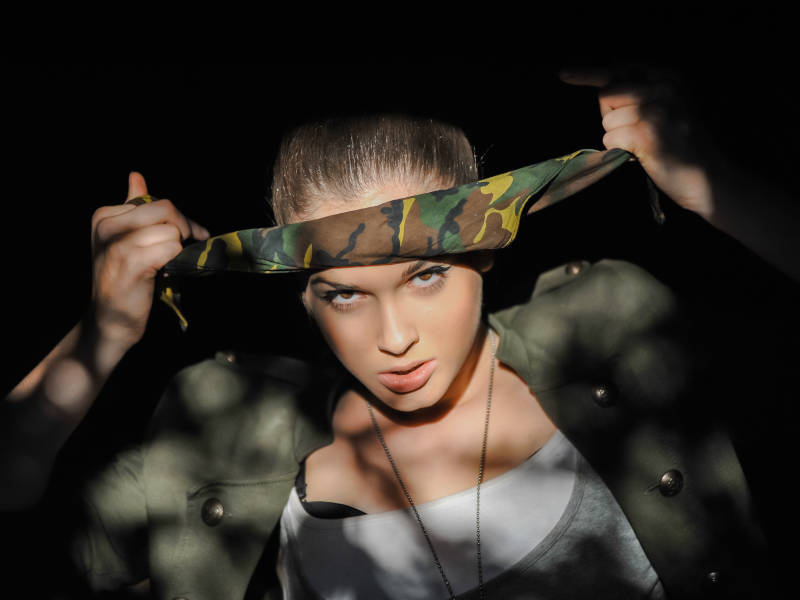 - You've just enrolled, now get out there and take over the town -

The hen will be The Queen, obviously. The rest of the royal gang could go as any member of the royal family, from top to bottom of the family tree and have a right royal knees-up. You could even go outside the box and go as a corgi / Buckingham Palace.

Every group will have a different idea of what their hen party theme should look like and that's what is so fantastic about the themes above. Although we've given you some amazing ideas (even if we do say so ourselves) for a hen party theme, they can all be adapted and personalised for the hen and the group in general. The theme is a great aspect to look at, but if you're still looking for ideas for the hen do activities in general, just get in touch with us and we'll help to come up with the perfect hen party. We also offer the following as part of our services:

> We'll send you as many quotes as you need, based on your ideas.

> When you say that one of the quotes is perfect, we'll get everything booked on your behalf, with just a £50 deposit.

> We will then organise everything, including all of the payments from everyone, using our online individual payment system. This means you don't have to chase people for money.

> You will have access to a detailed itinerary so you know where you have to be and when.

A hen do is a fantastic celebration already, but add in one of these awesome hen party themes and you've got something even more spectacular. We've provided 25 great hen do themes below for you to consider: